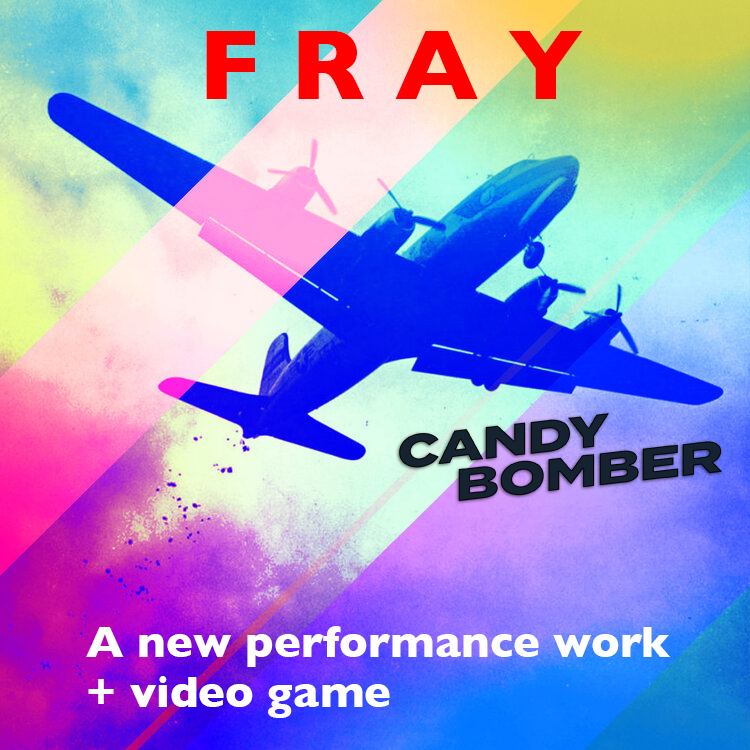 This is a new work in development. If you interested in learning more about co-commissioning and presenting this new work, email us here. A video trailer is available upon request.

FRAY opens a window into the powerfully engaging world of video games, bringing a very human story to the stage about two brothers. CandyBomber Productions is also designing a stand alone video game deriving the characters, story and game-play from the live show. FRAY audiences will be invited to play a prototype in the lobby before and after the live show.

Just as games kindle flames of delight for our main characters, dance ignites the very soul of FRAY. Ballet points to grace, and the flight of spirit the brothers achieve when their hearts are joined. Hip hop pulses through the message at the heart of FRAY. An art form born on the streets among dancers who have nothing other than a powerful urge to express themselves truthfully, to release their emotions, and to be seen and heard, Hip Hop is about dancers claiming their voices, and discovering the life-giving power and beauty of authentic self expression. Hip hop is danced from the heart, an act of self love. In FRAY, dance comes from deep inside the Tullio’s heart too, lighting a way for his brother to find his own way “home”.

THE STORY OF FRAY:

Tullio and Ziya, deeply bonded from birth, share a passion for video games that light up their sparse world with colorful landscapes and imaginary characters that inspire and challenge them, much like the people they meet in the real world outside. Their “avatar” hearts glow when they join forces, a super power in the games they play, and a superpower in real life too as they confront both shadowy bullies and inner demons throughout their teens. But real life isn’t a game, and dark forces loom that draw them apart. Tullio finds himself in a real life quest in which there is no analog “game controller” for real people, and steering his brother away from the perilous influences that attract him can’t be programmed into a computer. Tullio must confront what it means to love someone you are losing.

Music is performed by a DJ who shares the stage with six world class dancers who portray a wide variety of characters through movement that fuses hip hop and ballet. The brothers’ story unfolds on stage and in large-screen video game segments where their corresponding “avatars” take up the challenges they encounter in real life. At times, visuals accompany the dance on stage, and at other times, audience attention is focused entirely on the large screen, following Tullio and Ziya right into the colorful, imaginary game universe they inhabit.

FRAY ventures into a completely new frontier, connecting a video game launch with a live dance performance. Classical symphonies have already opened a door for large new audiences to enjoy live performances of video game music with accompanying game visuals. FRAY steps farther, weaving video games into the narrative of a live dance show, and carrying the show’s same characters and story-lines over to a playable game. The interplay of live show and game creates a novel and layered experience of discovery for gamers and non-gamers alike. Hip hop, now established and respected after 40 years of history, is an art form that is alive, constantly evolving through individual creativity and invention. It embodies the spirit at the heart of FRAY, which finds salvation through authentic artistic expression. FRAY also steps forward to explore a real human struggle between brothers, breaking the “happy ending” mold, while leaving hope and optimism flickering. FRAY delves into a world most often kept deeply secret, shining a light on the anguish of watching helplessly as someone we love battles inner demons.